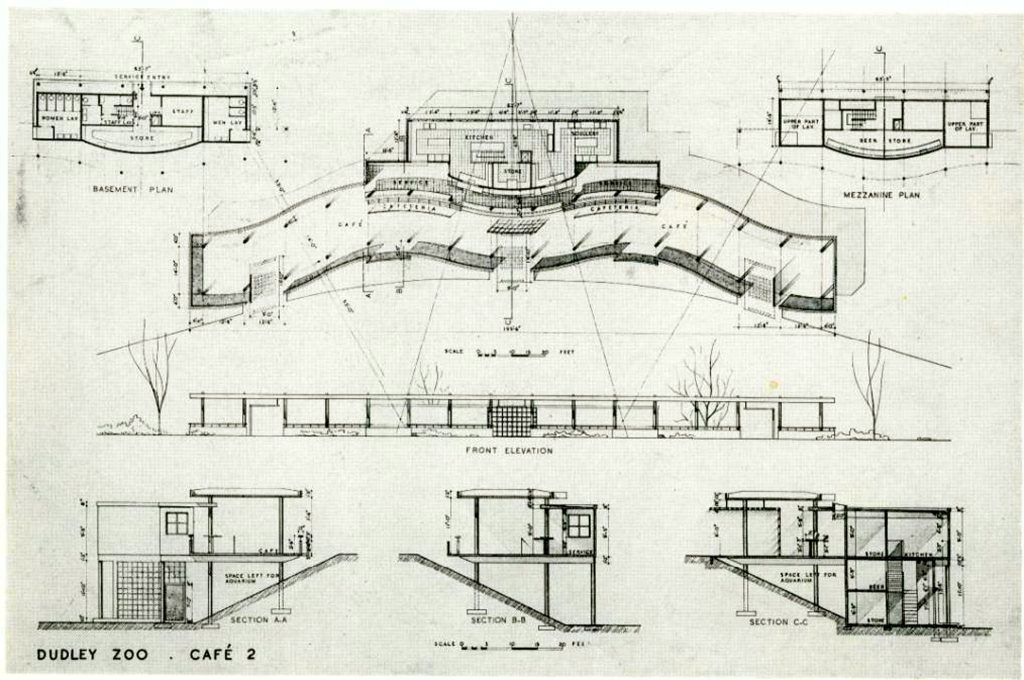 The building was constructed as the Moat Café, one of three eating places within the zoo grounds. It was built on a site not originally considered suitable for a building, given that it would interrupt a key view of the castle from the moat. However, it was eventually accepted by the Ministry of Works’ Inspector and in order to lessen its impact, the structure was made as light and transparent as possible. The buildings plan was constructed with flowing, serpentine curves, designed to break up the building’s outline when viewed from above. The side and rear elevations were glazed, while the front of the building was left open to increase its transparency. The entrances were indicated by floating slabs suspended from the roof. The main space, between the entrances, was defined by the use of a low wall with coping raised on short steel struts – the standard walling used for viewing areas and some enclosures around the zoo, which was one of the unifying details of the Tecton structures. The building, like all the large structures Tecton designed for the zoo, took advantage of the steep slopes of the castle grounds. In this instance allowing the front of the building that directly faces the castle to have a low, single-storey scale but with a second basement level at the rear, to house stores, beer cellar and staff rooms. The basement level was accessible externally from a service road at the rear of the building. The single-storey front section was built on stanchions, to allow for the subsequent excavation of the land on which it stands to accommodate an aquarium, though this plan was never carried out.

The building has undergone significant alteration since its completion, most crucially in the infilling and glazing of the entire front elevation; it now functions as the Zoo’s education centre.