THE CONSERVATION OF TECTON BUILDINGS AT DUDLEY ZOO, WEST MIDLANDS

The 12 listed Lubetkin-designed concrete structures at Dudley Zoo, built between 1936 and 1937, are the greatest collection of surviving Tecton buildings in the world and some of the most important modern movement buildings in the UK. As time has moved on and zoological practices have changed some of the Tecton structures have become unused and left to serve only as monuments. The lack of use has led to poor upkeep and deterioration. All were in a poor condition, mainly due to corrosion of the reinforcement, with works to enhance the structure required in a few locations.

Four of the structures have recently been repaired with help of the Heritage Lottery Fund. A conservation-based approach was adopted, with traditional concrete used for the majority of the repairs and carbon fibre added locally to stiffen a large cantilevered viewing platform. The repair of the structures was the first part of the conservation work and was followed by the reinterpretation of the structures to provide a programme which would sustain their future use. An area of the Bear Ravine is being used for long term testing by Historic England to monitor the performance of the different methods of repair.

THE SOCIETY FOR THE PROTECTION OF ANCIENT BUILDINGS (S.P.A.B) MAGAZINE 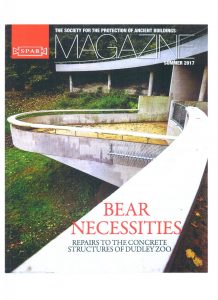 A feature on the repairs to the concrete structures of Dudley Zoo featured in the Summer 2017 edition of the S.P.A.B magazine. You can read the feature by clicking front page of the magazine OR HERE> 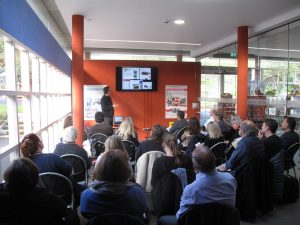 n the 12th October 2016 Dudley Zoo hosted the ICOMOS ISC20 AGM and on the 13th October 2016 a Concrete Conservation Conference for interested parties and professionals.

Dudley Zoo Conservation Conference included presentations based on the area of expertise the speaker had brought to the restoration project and one practical display.

Jon Wright: To give an introduction to Lubetkin and his ideas on design
Chris Wood: To talk about Historic England’s work on 20th century concrete
Stuart Tappin: To talk about the repairs at Dudley
David Farrell: To talk about the research and monitoring
David Platts: To deal with issues like cleaning and painting
Carlo Diponio: Practical display of concrete repair undertaken at the Bear Ravine