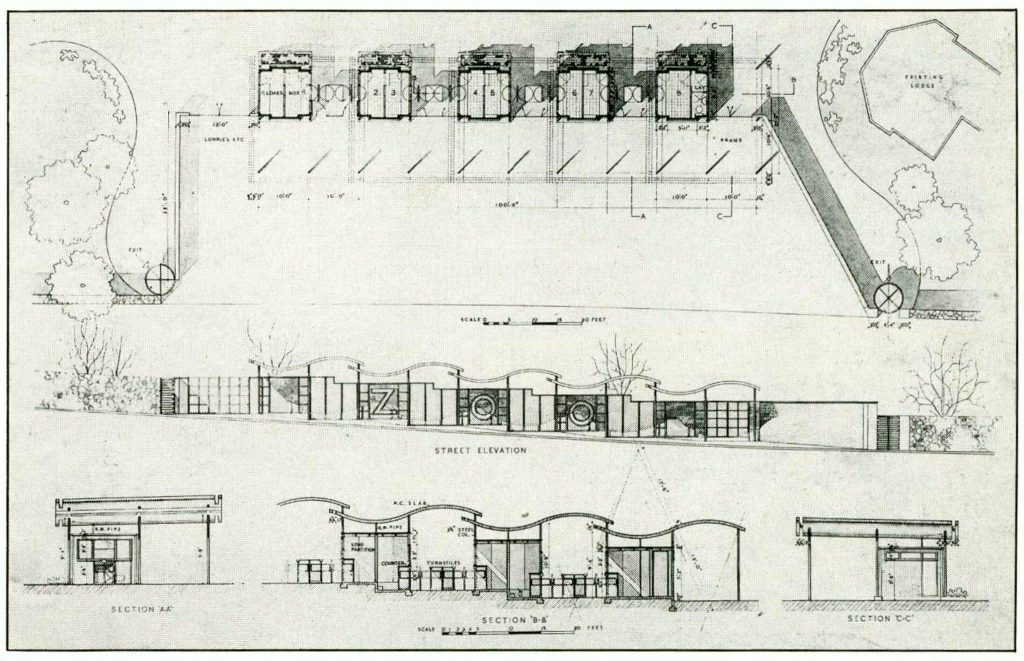 When the new Zoo was built there was only one possible space for the entrance building, as few areas of the grounds have a street frontage. It sits on the narrow apron of land at the foot of the hill on which the castle sits, and as such, the depth of the building was limited. As it was necessary to provide eight turnstiles, to cope with the large numbers of visitors expected, the building was designed with a very wide street frontage. The sloping site meant that the single slab roof which had been employed for the larger buildings within the zoo site was not suitable. Instead dynamic, interlocking S-shaped roof canopies were created to enable the roof to flow downwards, to follow the buildings they cover, and at the same time create an iconic design for this, the public face of the zoo. Practical considerations, such as the need to provide shelter for queuing visitors, and to maintain the appearance of the building, were taken into account, resulting in the deep overhang of the roof canopies, which have slots set just back from the front edge; this has the dual function of lightening the effect of the roof and preventing staining of the visible front edge as rain water runs off. The middle three kiosks were adorned with the now iconic ‘ZOO’ lettering, still present today.

In 2013 a Heritage Lottery funded project restored 4 of the Tecton structures, The Station Cafe, Entrance, Bear Ravine and adjacent Kiosk. The project team sort to repair the dilapidated structures and restore their original design intent. The restoration works were completed in 2014/2015.

Complete photographic record of work carried out on site, from inception to completion.