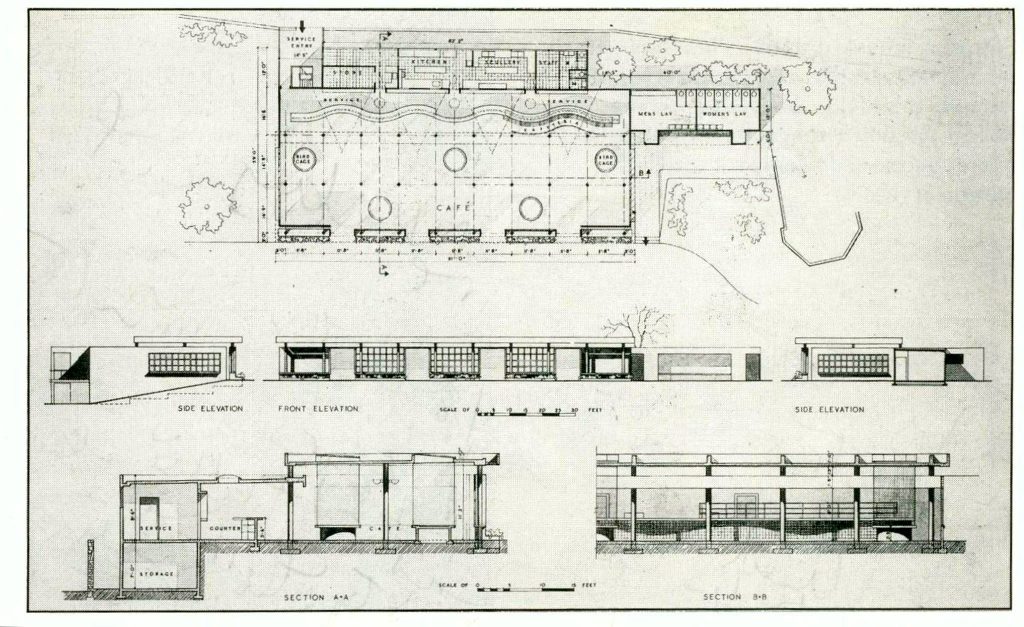 The building was constructed as the Station Café, its name coming from its proximity to the railway station, which brought visitors almost to the entrance. The building is set on the lowest terrace of the zoo, the rear of the building set against the perimeter of the grounds; it was accessible to both zoo visitors and those in the town. It was designed, as was the other café, the Moat Café, to be partly open to the air, the three sections between the four doorways were filled with an unglazed timber lattice frame, identical to that used in the Castle Restaurant, Moat Café and the refreshment kiosks elsewhere in the grounds, which helped to unify their various designs. The building was formed from a flat roof slab carried by a regimented grid of 9-inch diameter concrete columns, this roof structure extending beyond the front of the building. The front, side and rear walls were then built up, set inside the extended roof slab, but stood independently, finishing some way short of the roof. The four entrances, each defined by a concrete frame, were left open to the elements. This concrete frame wrapped around to continue between the openings forming bench seating, built around the external columns. Internally, the building was served by a long curved bar that ran the entire length of the space, its sinuous form in direct contrast with the regimented structure of the columns. Five large circular roof lights were set into the floating slab, three of which extruded down with wire mesh into the space forming aviaries. The floor was covered with rectangular flagstones and the walls painted vivid red and blue. To the south, a lavatory block adjoined the café.

The Station Café was later fully enclosed, by increasing the height of the walls to reach the roof, and the infilling or glazing of the open lattice sections. Until 1995 part of the building was a fish and chip bar for zoo use, and the remainder was a nightclub, which closed in 2002. In 1996, part of it was converted into a gift shop and alternative entrance, the rest remaining empty.

In 2013 a Heritage Lottery funded project restored 4 of the Tecton structures, The Station Cafe, Entrance, Bear Ravine and adjacent Kiosk. The project team sought to repair the dilapidated structures and restore their original design intent. The restoration works were completed in 2014/2015. More information on the project can be found on the below PDF.

Complete photographic record of work carried out on site, from inception to completion.