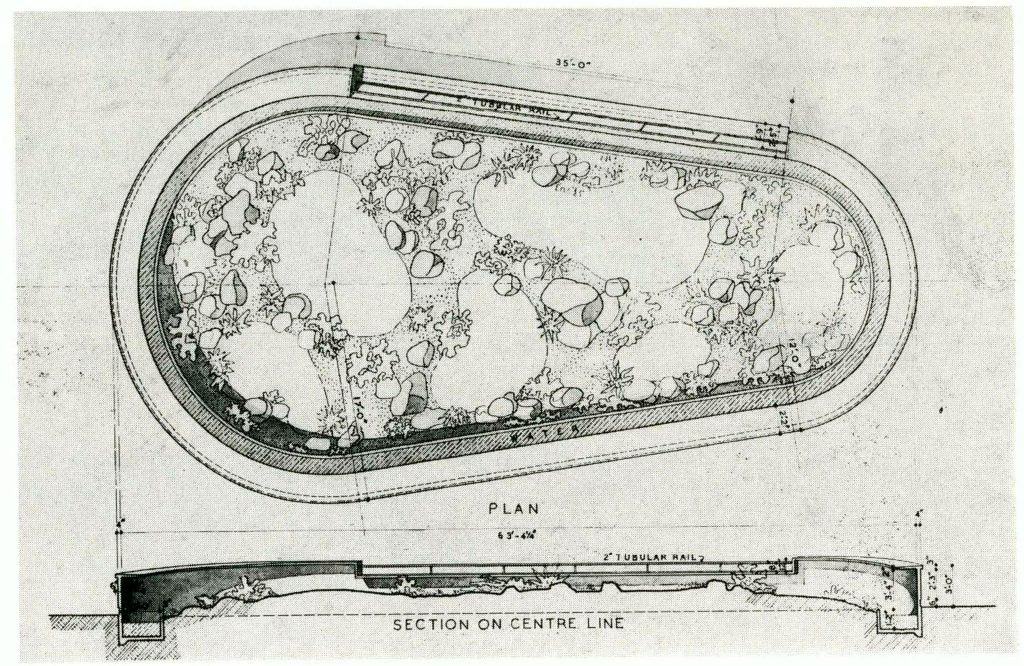 The Reptile Pit, a small, seemingly simple structure, was originally designed, as the name would suggest, to house small, none territorial reptiles. Sited next to the castle, its low, unobtrusive form, is respectful of its surroundings and does not obstruct the view of the castle beyond. The enclosure nestles snugly into the contour on which it is situated, and makes the most of its position below the castle keep, which provides it with a dramatic backdrop. The enclosure is bounded by a continuous low wall, the external face of which has the same corrugated finish exhibited on the Bear Ravine. There were no barriers between the public and animals, instead a small moat ran along the length of the inside of the perimeter wall, prohibiting any escape. The perimeter wall has an extended coping to create a viewing platform on which the public could lean and children sit. On the North face a small section of this parapet drops down, infilled with a tubular steel bar, to provide better views for children. The curving plan form and location providing uninterrupted 360o views of the animals.

Other than the infilling of the internal moat, the structure remains mostly unchanged from its original form and serves its current purpose, to house Meerkats, very well. The rear lower section was repaired in 2015 as a wider part of the HLF grant aided works carried out to the Station cafe, Entrance, Bear Ravine and adjacent Kiosk.